The following Article is from the American Freedom Law Center website. It shows how the federal government is using social media to censor our freedom of speech. 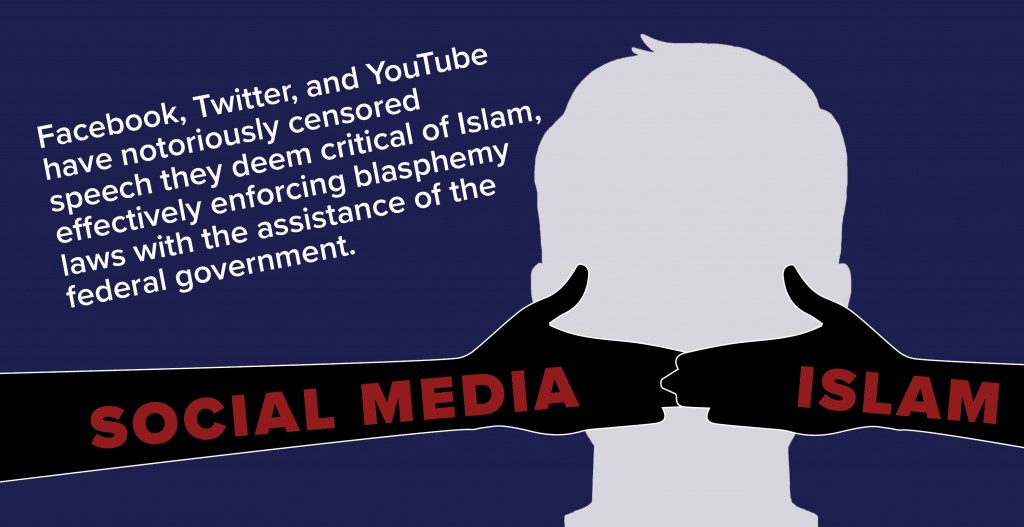 On July 13, 2016, the American Freedom Law Center (AFLC) filed a federal lawsuit in the U.S. District Court for the District of Columbia, challenging Section 230 of the Communications Decency Act (CDA) under the First Amendment.

The lawsuit was brought on behalf of the American Freedom Defense Initiative (AFDI), Pamela Geller, Robert Spencer, and Jihad Watch.

Such discrimination, which is largely religion-based in that these California businesses are favoring adherents of Islam over those who are not, is prohibited in many states, but particularly in California by the state’s anti-discrimination law, which is broadly construed to prohibit all forms of discrimination.  However, because of the immunity granted by the federal government, Facebook, Twitter, and YouTube are free to engage in their otherwise unlawful, discriminatory practices.

As set forth in the lawsuit, Section 230 of the CDA immunizes businesses such as Facebook, Twitter, and YouTube from civil liability for any action taken to “restrict access to or availability of material that” that they “consider[] to be obscene, lewd, lascivious, filthy, excessively violent, harassing, or otherwise objectionable, whether or not such material is constitutionally protected.”

“Section 230 of the CDA confers broad powers of censorship upon Facebook, Twitter, and YouTube officials, who can silence constitutionally protected speech and engage in discriminatory business practices with impunity by virtue of this power conferred by the federal government in violation of the First Amendment.”

Muise went on to explain:

“Section 230 is a federal statute that alters the legal relations between our clients and Facebook, Twitter, and YouTube, resulting in the withdrawal from our clients of legal protections against private acts.  Consequently, per U.S. Supreme Court precedent, state action lies in our clients’ challenge under the First Amendment.”

“Facebook, Twitter, and YouTube have notoriously censored speech that they deem critical of Islam, thereby effectively enforcing blasphemy laws here in the United States with the assistance of the federal government.”

“It has been the top agenda item of Islamic supremacists to impose such standards on the West.  Its leading proponents are the Muslim Brotherhood’s network of Islamist activist groups in the West and the Organization of Islamic Cooperation (OIC), which co-sponsored, with support from Obama and then-Secretary of State Clinton, a U.N. resolution which called on all nations to ban speech that could promote mere hostility to Islam.  Facebook, Twitter, and YouTube are falling in line, and we seek to stop this assault on our First Amendment freedoms.”