The following article is from the Rabwah Times:

Pakistan born Islamic cleric Rafiq Khan defined America as “The land of Infidels” at a fundraiser for his Islamic charity this Saturday. The event which was held at a Holiday Inn in Springfield, Virginia attracted over 100 participants. Speakers included an Islamist from Pakistan as well as radical Imams from the states of Maryland, Virginia, and Texas. The conference revolved around the topics of Jihad, Infidels and what can the American Muslim community do to counter conspiracies against Islam.

We went undercover to report on the day-long event which was organized by two U.S. registered charities, Idara Dawat-O-Irshad and Khatme Nubuwwat Center, both of which enjoy IRS tax-exempt status. 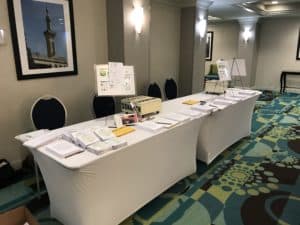 The registration desk which was manned by teenagers displayed flyers and posters denouncing the founder of the moderate Ahmadiyya Islamic sect. An exhibition stall lined with posters urged Muslim voters to not vote for “non-Muslim candidates”. The event particularly targeted the Ahmadis who are considered heretic by the majority of mainstream Muslims as they believe in another Prophet after Prophet Muhammad and have a different understanding of Jihad. Many of the conference speakers accused the Ahmadis of being ‘Infidels’ and criticized them for having ‘abolished Jihad’. 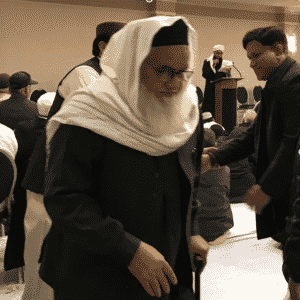 The event’s keynote speaker was Habib-ur-Rehman Ludhianvi, a visiting Islamic cleric from Pakistan. In a 2016 piece, Ludhianvi who serves as the editor of monthly Millia magazine claimed that America was behind the assassination of former Pakistani Prime Minister Benazir Bhutto.

Ludhianavi, who is also the principal of the Islamic seminary Dar-ul-Uloom located in the Pakistani city of Faisalabad claimed that ‘ignorant Infidels’ need to be dealt with force, He said:

“They are ignorant and there is no need for dialogue with them, God has given them two options, one is the holy book and one is the stick [Force] and if one does not accept the holy book they have to be forced”

He also urged American Muslim Lawyers to use the American Justice system to restrict the religious freedom of Ahmadis:

“Have all Muslim lawyers died, why cant they learn and understand U.S. laws and then go present their case in front of the judge and explain that Qadianis [Ahmadis] are disrespecting Islam……..Islam is our faith and they [Ahmadis] are portraying their religious beliefs as Islamic beliefs ……. it should be made criminal for them to do so”

Commenting on the dangers faced by Islam, Ludhianvi said:

“The biggest threat that Islam is facing today is the disruption of the family system, for which they [west] are urging women to go out of their homes”

Last year in his magazine, Ludhainvi issued a Fatwa (decree) stating that “The use of cellphone by women in public places was against Islam” and so was wearing “High heel shoes”

Another Islamic cleric, Usman Ahsan, a graduate of Dar-ul-Uloom, a Canadian Islamic seminary declared that claiming to be a Prophet after Muhammad was “enough to wage war” against them.

Similar comments were made by Mufti Qareeb ur Rehman, an American Imam who graduated from Pakistan’s Jamia Binoria Karachi, an Islamic seminary with ties to extremist groups. Rehman currently serves as an Imam at the Manassas Muslim Association.

Another Jamia Binoria graduate, Imam Shazad Hussain of Springfield’s ‘Noor Mosque’ claimed that the minority Ahmadis conspired with the British to stop Muslims from ‘fighting Jihad and committing bloodshed’.

The Jamia Binoria seminary is the source of many extreme Islamic teachings which include support for Suicide attacks and the death penalty for apostates. Other Fatwas issued by Jamia Binoria include:

Event moderator Omar F. Khan, who is a teacher at the ‘Idara Dawat-O-Irshad’ charity went to great lengths to explain why Shiites Muslims were also “Infidels”.

During a Question and Answer session, Pakistani speaker Habib-ur-Rehman Ludhianvi warned the U.S. Government to “stop giving refuge to the adherents of the Qadiani faith [Ahmadis]” who he claimed were worse than Jews & Christians.

The conference ended with organizers urging the attendees to donate $100 each to pay for the expenses of the “cause”. The organizers also thanked the “Karahi Kabob” restaurant owner for providing free food to the conference attendees.