Nearly 120,000 foreign nationals have been allowed to enter the United States since 2005 despite coming….from the three countries that the State Department recognizes as state-sponsors of terrorism: Iran, Syria, and Sudan.

It happened through “chain migration,” by which “new immigrants can bring an unlimited amount of foreign family members with them to the U.S.” Add to that number 140,000 nationals from Bangladesh, which is the fourth largest Muslim country in the world by population (after Indonesia, Pakistan and India). As noted in the article below, Akayed Ullah, the perpetrator of the “botched ISIS-inspired terrorist attack in New York City this week,” is a Bangladeshi national.

Trump has stated that he plans to end “chain migration” as a threat to national security, and instead implement a long overdue merit-based system. Of course, there are those who will again accuse Trump of being “racist” in his determination to protect all Americans. It is worthwhile to note that Trump did not first raise the topic of ending chain migration because of the NYC incident. He raised it in the first week of November as part of a DACA deal.

Now Trump must also come up with a plan on how to deal with American Islamic State jihadis who are unaccounted for in the midst of valid fears about their return from Iraq and Syria. 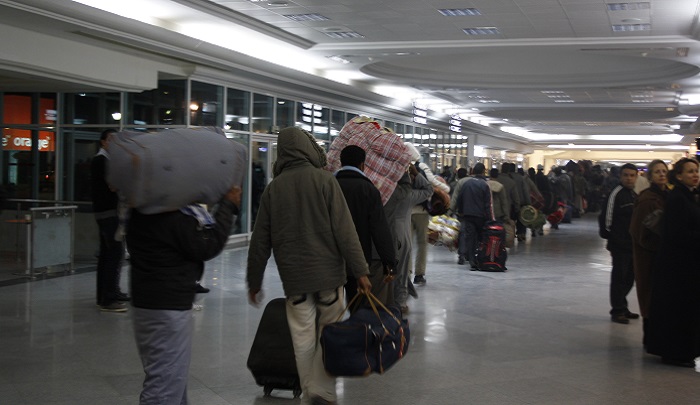 Nearly 120,000 foreign nationals have been allowed to enter the United States since 2005 despite coming from countries designated as state-sponsors of terrorism.

Previously unreleased data from the Department of Homeland Security (DHS) reveals the scale to which foreign relatives of immigrants in the U.S. have been able to mass immigrate to the country over the last few decades. This process is known as “chain migration,” whereby new immigrants can bring an unlimited amount of foreign family members with them to the U.S.

In total, chain migration has imported more than 117,000 foreign nationals from the three countries that the State Department recognizes as state-sponors of terrorism: Iran, Syria, and Sudan.

Though not being a state-sponsor of terrorism, Bangladesh has been able to send more than 140,000 foreign nationals to the U.S. since 2005 due to chain migration, Breitbart News reported.

This data was released to Breitbart News following a botched ISIS-inspired terrorist attack in New York City this week where 27-year-old Akayed Ullah, a Bangladesh national, allegedly attempted to detonate a suicide bomb.

Terrorist-sanctioned countries have also sent nearly 30,000 foreign nationals to the U.S. since 2007 via the Diversity Visa Lottery program that was championed by Sen. Ted Kennedy and Sen. Chuck Schumer (D-NY), Breitbart News reported.

Under the Visa Lottery, the U.S. randomly gives out 50,000 visas every year to foreign nationals from a multitude of countries, including those with known terrorism problems, such as Iran, Syria and Sudan.

The U.S. has brought in nearly 21,000 Iranian nationals, 2,732 Sudanese nationals and 812 Syrian nationals on the Visa Lottery — not counting subsequent chain-migration of additional unscreened people from those countries — even though all three countries are listed as state-sponsors of terrorism.

In total, about 9.3 million foreign nationals have entered the U.S. since 2005 because of chain migration, making it the largest driver of legal immigration to the country.

As Breitbart News reported, chain migration makes up more than 70 percent of all legal immigration — with every two new immigrants bringing seven foreign relatives with them.

Currently, only one in 15 foreign nationals admitted to the U.S. come to the country based on skills and employment purposes. Though roughly 150,000 employment-based Green Cards are allotted every year, half of those Green Cards actually go to the foreign relatives of employees.

In the last decade, 1.7 million chain migrants have entered the country from Mexico, with the average Mexican immigrant bringing roughly six foreign relatives with them to the U.S. Mexico sends more chain migrants to the U.S. than any other country.

Despite President Trump and Attorney General Jeff Sessions’ calls for chain migration to be immediately ended by the Republican-controlled Congress, Senate Majority Leader Mitch McConnell and House Speaker Paul Ryan have yet to champion the initiative……