The desire for freedom can never be entirely extinguished from the human heart. 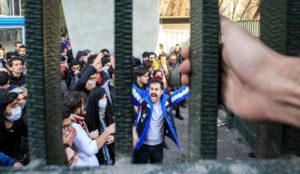 “How Iranian protesters are skirting the government’s tech clampdown to continue their fight,” by Hollie McKay, Fox News, January 5, 2018:

Protesters have taken to the streets in Iran, demonstrating against the country’s clerical regime. As many participants are being arrested, and even killed, there is a growing call of appreciation and more support from the Trump administration.

While the already repressive Iranian government works to further shut down social media that helps fuel communications among thousands of protestors, the predominantly young, college-aged crowds in the street are scrambling to stay ahead with a variety of counter-censorship maneuvers.

“Iranians are used to changing. Remember we were the first ones using Twitter for political purposes in the Green Revolution in 2009, when Twitter was still largely unknown,” one activist, Ali, told Fox News. “Then it was blocked. Then Facebook came and then it was blocked. Now Instagram and Telegram.”

Iranian officials are blocking access by essentially building a “massive firewall,” according to Dave Chronister, managing partner of Parameter Security and an “ethical hacker” who has worked with the U.S government. But access hasn’t been completely cut – leaving the protesters room to maneuver.

“The Iranian government is blocking access to certain IP ranges altogether (such as news sites) and at the same time they are also allowing certain sites to be accessed,” said Chronister. “But they are using content filtering to block what they consider to be risky or subversive, for example Twitter hashtags. So the Iranian activists are using different ‘tunneling’ methods to hide their traffic through encryption and therefore bypass government restrictions – for instance, they use a Virtual Private Network (VPN).”

The VPN encrypts web traffic, so it obscures information that makes it harder for Iran’s security apparatus to catch or block.

One activist in Tehran told Fox News he has downloaded about 10 VPNs, and just one is working. While VPNs can be quickly shut down when detected, activists can just as quickly scramble to find more. Some have also since turned to other platforms such as the anonymity network Tor, which allows users to conceal their location.

But it remains a dangerous game.

“Iranian activists are using a ton of proxies to hide their true identities. A proxy is basically an outside IP address that masks your true one, so if an Iranian citizen uses a proxy to access the internet, he or she will appear to Iranian authorities to be coming from another country like Australia or Hong Kong,” said Jeff Bardin, CIO of Treadstone 71 and a former Air Force intelligence operative.

Should that shut-down happen – which is of increasing concern since the Revolutionary Guards Commander Mohammad Ali Jafari said Wednesday that “when cyberspace was controlled, we saw a decrease in sedition,” the activists have a backup plan.

“Every day we know at 5pm to gather in identified places: the main square in every city and the four main squares in Tehran,” one protest leader in Tehran told Fox News in a telephone interview on Thursday.

Protesters suffered a setback when access to the encrypted phone messaging app Telegram was shut down last weekend. The app is hugely popular in Iran, given there are more than 40 million registered accounts there. Dubai-based Telegram founder Pavel Durvov claimed his app was blocked after he refused to adhere to the regime’s demands to shut down certain channels used by “peaceful protesters.”…