215 million Christians faced the most severe persecution in 2017, resulting in 3,066 deaths and 1,020 rapes mainly targeting women

While North Korea tops the list of the world’s worst persecuting countries, in second place and occupying every place down to number 14 are majority-Muslim countries, with the single exception of Eritrea.

The world has grown accustomed to this intolerable abuse against Christians, and whenever the ubiquitous and systemic Islamic abuses of Christians are pointed out, apologists are quick to divert attention away by pointing out other abuses elsewhere. 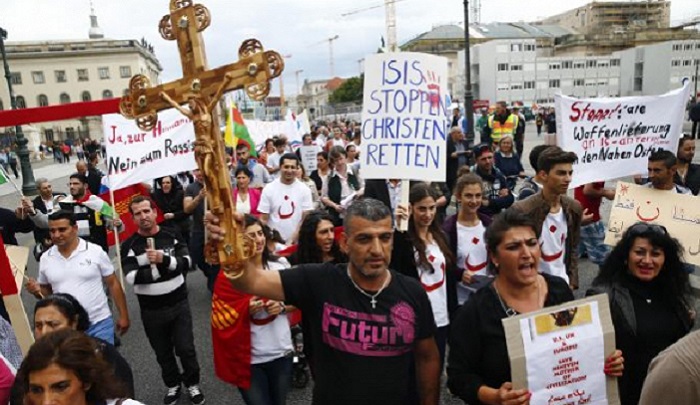 WASHINGTON, DC — North Korea stands at the top of a list of 50 countries where at least 215 million Christians faced the most severe persecution in 2017, resulting in 3,066 deaths and 1,020 rapes mainly targeting women, revealed Open Doors, an organization that monitors ill-treated Christians worldwide.

At the National Press Club on Wednesday, David Curry, the president and CEO of Open Doors, unveiled the 2018 World Wide List (WWL) of the top 50 “most dangerous” countries to worship Jesus. Referring to North Korea, he declared:

Imagine in your mind a leader that thinks he’s god but acts like an animal — devouring his own people with his teeth where people are forced to worship at the statute of Kim Jung Un and bow down and lay flowers at his feet as if he was a god.

Yet, [Kim] sets up controls mechanisms, neighborhood watches that surround communities rewarding citizens for spying on each other giving them more food if they find somebody who has a Bible and who purports to a be a Christian and that makes Christians the number one enemy of the state in North Korea and that’s why it is the number one on the world’s watchlist.

Open Doors pointed out that thousands of Christians are facing death worldwide for practicing their faith, particularly in North Korea.

According to the monitor group’s 2018 World Watch List (WWL), “215 million Christians experience high levels of persecution in the [50] countries on the World Watch List,” with the majority of them in North Korea, considered “the worst place for Christians” for 16 consecutive years since 2002.

The primary driver of persecution in North Korea is the state. For three generations, everything in the country focused on idolizing the leading [Kim Jung Un] family. Christians are seen as hostile elements in society that have to be eradicated.

Due to the constant indoctrination permeating the whole country, neighbors and even family members are highly watchful and report any suspicious religious activity to the authorities…The situation for Christians is vulnerable and precarious. They face persecution from state authorities and their non-Christian family, friends and neighbors. Pray for their protection.

There are many Christians languishing, starving, and enduring hard labor in North Korea prisons for merely owning a Bible and having faith in Jesus Christ.

Since the U.S.-led war that started in Afghanistan soon after September 11, 2001, the United States has spent at least $877 billion on the war-devastated country, including on the promotion of religious freedoms.

Nevertheless, Afghanistan came in second place in the list of the top 50 worst countries in terms of persecution — where the cost of being a Christian can quickly turn into a nightmare and the last breath one ever takes.

Of the top ten countries, eight are tormented by “Islamic Oppression,” which mainly refers to hostility against Christians. Eritrea and North Korea are the exceptions.

Meanwhile, persecution against Christians at the hands of “Hindu extremists” in India is on the rise, resulting in deaths and rape of Christian women.

“A shocking trend in the world watchlist I want to highlight for you today is the increase in persecution of Christian women,” stated Curry. “The data seems to prove that Christian women are the most vulnerable population today with sexual harassment and rape and forced marriage being prime tactics from extremists against the world against Christians.”

Pakistan, India’s regional enemy, has accused Hindu extremists of persecuting Christians and Muslims and forcing them to convert to their religion….

Every day, Christian women reportedly face sexual harassment, rape, and forced marriage, all common in India, which is ranked 11 on the persecution list.

The justice for Christians in India is “poor,” determined Curry, noting that 635 Jesus followers were held and detained in the nation without trial last year alone, often called one of the largest democracies in the world.

Of the 50 nations on the Open Doors World Watch list, at least two Western Hemisphere countries made the cut joining the very few predominantly Christian nations on the list — Latin America’s Mexico (39th place) and Colombia (49th) where persecution is reportedly driven by “organized crime and corruption.”

The monitor group identifies North Korea’s communist and post-communist oppression as the primary source of persecution against Christians, which make up a little over 1 percent (300,000) of the 25.4 million population.