Like so many other Muslim leaders before him, Riyaz Naikoo plays the victim in justifying his jihad murders of Kashmiri policemen. He doesn’t want to kill them, you see, but has to in order to free Kashmir from “Indian oppression.” What oppression? Simply rule by non-Muslims — that’s what constitutes to oppression for Islamic supremacists.

In any case, he says “we love and hate for the sake of Allah.” This is the Islamic doctrine of al-wala wal-bara, loyalty and disavowal: one loves and is loyal to what Allah loves and hates and disavows what Allah hates, which includes unbelievers: “Indeed, there is for you a good example in Abraham and those with him when they said to their people: ‘Surely we are clear of you and of what you serve besides Allah; we declare ourselves to be clear of you, and enmity and hatred have appeared between us and you forever until you believe in Allah alone’” (Qur’an 60:4).

One must be harsh toward those whom Allah hates: “Muhammad is the apostle of Allah. Those who follow him are merciful to one another, harsh to unbelievers” (Qur’an 48:29). 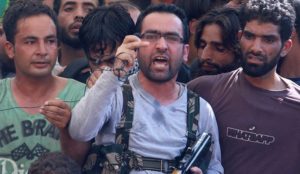 SRINAGAR: Hizbul Mujahideen militant commander Riyaz Naikoo has said that militants are grieved to see the family of the killed policemen at SMHS hospital.

“We are grieved to see the pain of the children of the killed policemen. We neither want to see any child becoming orphan nor any mother a widow,” said Riyaz in an audio which went viral on social media.

On Monday, militants attacked a police party who were taking a hardcore Pakistani-origin militant Naveed Jutt alais Hanzullah to SMHS hospital for treatment. In the attack, Hanzullah escaped along with the accomplice – the fact confirmed by Riyaz in the audio.

“Both of them are safely with us now,” Naikoo said. “We don’t want to kill any Kashmiri (policeman) but are forced to do so. To get a Pakistan brother released, we had to kill two Kashmiris. We have to do this to free Kashmir from Indian oppression.”

“We love and hate for the sake of Allah. We don’t have any personal hatred against policemen,” Naikoo added.

The militant commander also said that Pakistanis are leaving their families and country to “fight for our freedom”….